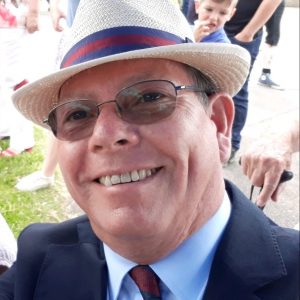 His father was Bramwell William Goodson who was born at the Nightingale Nursing home, Derby on 23 April 1923. His mother was Winifred Goodson (nee Marshall) who was born in Northampton on 16 July 1927. He had one brother (Andrew Richard) and two sisters (Kathleen Anne and Judith Marcia).

Robert left school aged 15 ¼, then took a series of jobs as a coach-builder, a paper-maker and as a butcher, but wanted to join the Army and have a military career. It was not until mid-1976, at the age of 21 years, that – at the Army Careers Office, St. Albans – he enlisted into the Grenadier Guards as an adult soldier.

He reveled in the training and loved everything he was being subjected to, or taught. Basic training ended in March 1977 and at his Passing Out Parade at the Guards Depot, Pirbright, he was awarded Best Recruit.

He was posted to the 2nd Battalion Grenadier Guards, stationed in Chelsea Barracks and served in the Mortar Platoon as a Mortar Number, Assistant Command Post Operator (ACPO) and Mortar Fire Controller until August 1983. During this time he served with the Battalion in London, Kenya, Cyprus and twice in Northern Ireland.

From August 1983 to November 1984 he served initially as a Recruit Instructor and then, having been promoted in post, as a Superintending Sergeant at the Guards Depot, Pirbright.

From November 1984 he served with the 1st Battalion Grenadier Guards at Hounslow as a Platoon Sergeant in Number 2 Coy. He was then cross-posted back to the Mortar Platoon to serve as a Command Post Operator (CPO) in Münster, Germany. During 1986 he served with the Battalion in Armagh on another Northern Ireland tour.

In August 1988 he was posted to the NCOs Tactical Wing at the School of Infantry, Brecon as a Colour Sergeant Instructor, a job he enjoyed immensely and at the end of his initial tour there, he was privileged to be able to serve an extra 6 months in post. In December 1990 he returned to the 1st Battalion that was once again stationed in Münster but away serving in the Gulf.

Unable to join the Battalion, he was instead sent to Sennelager to train troops for Operation Granby. The Battalion eventually regrouped after the Gulf War and he took on the role of the Battalion Ration Accountant and put his IT skills to use delving into the computer world of CATPAC. He returned with the Battalion to Wellington Barracks in October 1991 to perform Public Duties.

Ever eager to remain a serving Grenadier he transferred onto the Long Service List in May 1999 remaining at Cinque Ports Training Area (CPTA) where he coordinated unit training requirements for units deploying on Operational Tours, TA and Cadet Annual Camps and even Scout Camps. Around this, he administered a computer network of 30+ computers, maintained a further 50+ stand-alone PCs plus conducted troubleshooting PC problems (providing solutions he preferred to term it) and advised on any matter of other things. It kept him very busy and a job he reveled in. Robert left CPTA on discharge in April 2002.

During his service Robert was awarded the General Service Medal 1962 with clasp Northern Ireland, the United Nations Medal (Cyprus), the Queen’s Golden Jubilee Medal and the Long Service and Good Conduct Medal. He saw service in Kenya, Canada, British Army of the Rhine (three tours), Cyprus, the United Kingdom and Northern Ireland.

He left HM Forces in April 2002 after 25 ½ years of adult Colour Service, but is able to continue his links with the Regiment by serving the East Kent Branch Grenadier Guards Association as Hon. Secretary, a post he took over on 15 March 2009, as Treasurer, a post he took over in August 1998 and as the Webmaster of this website. He is also the Event Coordinator for the Branch. On Saturday 2 September 2017 he was awarded Life Vice Presidency of the Branch.

His hobbies are all things computer-related, gardening, skiing, fishing and travelling.

Following his service in the Army, Robert worked as a Field Engineer, as a Client Technology Engineer and finally as a Wintel Engineer for a company in Ashford, Kent; now among the largest software companies in the world. He is a qualified Hardware and Software Technician and a Microsoft Certified Professional.

Robert retired on 31 May 2019. Plans were to then spend time travelling, but Covid-19 has put a temporary dampener on that.