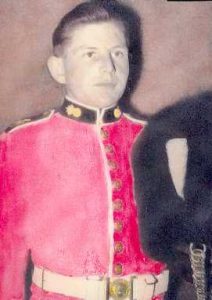 Guardsman Peter Rogers joined the Grenadier Guards at Caterham on 9th March 1951 and received the Regimental number of 22213767.

I had only been in a Squad for a few weeks when I had to go into hospital for an operation, returning to Caterham again in June 1951. It was at this stage that I joined Sgt J Pope’s Squad. Sgt E Rogers was the Superintending Sergeant, Lt PH Haslett was the Platoon Commander and Trained Soldier T Walpole was the squad’s trained soldier. After Depot training I went to Pirbright and spent the last two weeks of training in Pickering, Yorkshire.

After embarkation leave I sailed for Egypt aboard the “Charlton Star” and arrived at Port Said on 30th December 1951 where I joined No 3 Coy, 3rd Battalion in Tel-El-Kebir before moving to Delesoir by the edge of the Suez Canal. The Commanding Officer was PAS Robertson and the RSM was Reg Butler.

I then went to Support Coy on the Abu Sultan Warfe. My Company Commander was initially Major DW Fraser before Major Heywood Lonsdale MBE, MC took over command. The CSM was CSM Weston, DCM and I recall CSM L Bing and PSgt Dyer.

I joined the Anti-Tank Platoon under 2Lt SJ Loder and then 2Lt C Airy (who became General Airy) and the Platoon Sgt who was the late Major P Lewis, MBE where we were kept busy doing guards on the CinC’s house (General Robertson) and No 9 B.A.D. We had 17 pounder Anti-Tank Guns.

On 19th April 1953 I left Egypt for England with a contingent from the Battalion for the Coronation. I left England again on 18th June 1953 until on the 25th February 1954 I departed Egypt bound for Chelsea Barracks were the Battalion were kept very busy doing Public Duties. It was here that CSM Bing left the Battalion being replaced by CSM Staniland in Support Company. I became his batman. By now the Commanding Officer was AMH Gregory Hood, MBE, MC and the RSM was W Nash.

I spent my last year with the 3rd Battalion at Victoria Barracks, Windsor and left the Regiment on 9th March 1956 after 5 years service and started working in the building trade in my home town of Sandwich, Kent.

In August 1956 I was recalled to the Colours for the Suez Crisis, rejoining the 3rd Battalion at Victoria Barracks. I sailed on “New Australia” for Malta from where the Battalion waited for deployment to the Suez. The action was, however, called off so the Battalion left for Cyprus doing anti-terrorist duties. I left Cyprus along with the other Reservists on the “Empire” on 21st December 1956 bound for home. We arrived back in Southampton on 31 December 1956, travelled to Brookwood and was demobbed at Pirbright.

I went back to the building trade for the remainder of my working life. On 9th March 1963 I married my wife Eileen. I retired on 18 September 1998 aged 65 and now live in Sandwich, Kent.

Peter died on the evening of 06 May 2022.  Funeral arrangements will be notified to Branch members once known.

Back to In Memoriam
Toggle Sliding Bar Area